Baxter Brown was a boxer dog.

I didn’t know his name when he arrived on my porch one cold March evening about five years ago, but I had seen him before. He wore an ugly orange collar with the owner’s name and number roughly engraved on a gold plate.

I called the owner. “Aw, just beat him with a stick. He’ll come home,” the owner said.

“Someone needs to be beaten with a stick,” I said. “But it is not the dog.” I hung up and invited the dog inside, where he belonged.

He was shivering and terribly thin, so I warmed blankets in the dryer and tucked them around him after offering him a bite to eat. He slept soundly that night.

The next night, he arrived on the porch again. This time, he scratched on the door lightly, three times, as one would knock at a neighbor’s house. I guess it took me longer than he expected to answer, and he scratched slightly harder a second time, making sure I knew he was waiting. Funny how he offered second chances to do right by him.

I let him in, and I swear he gave me a nod of thanks as he trotted to the food bowl. After eating his fill, he snuggled next to my white lab, Reese, on her bed and slept through the night. It never occurred to him that he would not be welcome in her bed. There were no kerfuffles. The two slept soundly curled together all night.

His evening visits continued, and he arrived without his collar one night. I took it as a sign his owner had relinquished any claim on the dog I’d named Baxter Brown the Boxer Dog. I had him neutered, vaccinated, and treated for heartworm. “Looks like you’re mine,” I told him as we drove home from the vet’s office.

Baxter looked at me curiously. Wasn’t I always?

Baxter was a sweet boy but not particularly attractive. His tongue was absurdly long and forked, his nose scarred, and he had horrible teeth that only some serious orthodontic work could fix. These traits made Baxter look fierce, but his looks were deceiving. The beauty of Baxter’s character far outweighed his rugged appearance. Baxter befriended almost everyone he crossed paths with over the years—people, horses, cattle, dogs, and cats seemed to sense his inherent goodness.

Oh, there were a couple of grumpy copperheads who denied him the benefit of the doubt when he tried to play with them. And, once, Baxter marked as unsafe a woman I’d mistaken for a friend. She was lounging in a chair beside the arena, watching her kid take a riding lesson when Baxter strolled past. He paused ever so casually, lifted a leg, and peed all over her brand-new suede fashion boots with four-inch heels. His discernment about that one was exceptionally accurate on many fronts—even he knew the signs of ridiculousness in a horse stable.

What I loved (and envied) about Baxter was his comfort in his own skin. He never questioned whether he deserved food, shelter, warmth, or companionship. Such things shouldn’t seem like privileges or rewards for living creatures—canines, humans, or otherwise—but too often, they are. Baxter chose not to stay where he was “supposed” to belong because he knew he needed and wanted more. So, he found himself a home where he knew he belonged.

Knock, and the dog lover down the road will open her door. Stare at the food in the bowl or the door opener’s plate, and she will feed you. Look for people to love, and chances are you’ll find them. Love them unconditionally; chances are good that they’ll love you back. Baxter was a smart dog.

A few years after Baxter moved in, I moved to a new house. At first, I kept him leashed until he knew where home was. Before long, he was roaming happily up and down our dead-end road and romping through the woods. Eventually, I noticed that he left and returned on a schedule as though he went to and from work each day.

He had introduced himself to our neighbors who lived about a quarter of a mile away. He liked their dogs and children, and they liked him. He also decided he belonged at their house and spent long hours playing hard and eating heartily. (He grew quite chunky.) He was such a regular that the man of the house called Baxter “the best dog he never owned.”

Baxter Brown, the Boxer Dog, was an ambassador for openness and a model of self-acceptance. No one “owned” Baxter. He did not belong to anyone; he belonged with those he chose to love and who loved him. He lived as though he didn’t belong anywhere; he knew he was worthy of belonging everywhere and found his way.

People spend thousands of dollars and years in therapy learning to live like Baxter. He recognized his needs and wants, did not question their legitimacy, and found ways to meet them. He ventured courageously into others’ geographical and emotional spaces and fulfilled his need to belong.

I wonder what the world would be like if we all showed up as our ugly-beautiful selves, knowing we were worthy of belonging. Baxter didn’t imagine such a world; he lived as though it already existed. He made it look so simple.

Last August, Baxter was diagnosed with lung cancer. He also had a tumor on his spine. The vet studied the x-rays. “He shouldn’t even be ambulatory,” she said. She gave him a few weeks, maybe a month or two, and started him on medications to help him breathe and keep him comfortable.

Weeks, then, months passed, and Baxter continued to eat, drink, play, sleep, and love as hard as ever. He sounded like he was snoring when he breathed, and the vet monitored him carefully for signs of distress. She said when Baxter stopped having “Baxter” days—we knew what she meant—it would be time to do for him what he could not do for himself.

Our last vet visit was a couple of weeks before Christmas. The lung x-rays showed the further progression of cancer. We described Baxter’s daily routine, and Dr. Kirby listened attentively. “Let’s let him enjoy Christmas,” she said. “Feed him cheeseburgers if he wants them. Let Santa Clause come.” We were glad Baxter had some more Baxter days left to enjoy. We chose not to count them, although we had accepted that they were numbered.

Christmas Day was beautiful—crisp and sunny. Baxter trotted along with the other three dogs on walks and asked to go out on his own a few times, as he liked to do. He was the only one we allowed out on his own. He’d either stay in the yard or wander down the private lane beside the property.

Evening came. I’d seen a bit of blood on his nostrils early in the day. A first. Otherwise, his condition seemed status quo. We were grateful that Baxter had had a Baxter day on Christmas. Baxter asked to go out, and we let him. We took the other dogs outside a few minutes later and called Baxter. He didn’t come. We called again. And again. Still no Baxter.

A neighbor came out of her home. Her husband had called frantic. He’d hit a dog and couldn’t find it.

Baxter never went near the road….

We found him in the neighbor’s front yard.

Hysterics. Wailing. Mine. He was supposed to make it through Christmas.

God knows what the neighbors thought.

Later, in bed, tears still flowing, I asked Darrell why he was so composed. We are newlyweds, still learning about each other in many ways. Grief is so individual.

He paused before answering, then turned toward me. His tone was thoughtful, among the many traits I love about him.

“I think,” he said, ” God gave Baxter the golden ticket tonight. He put him through to the finals so he wouldn’t suffer if cancer acted faster than we did, despite our best intentions.” He paused again. “If I seem composed, it’s because I feel a sense of peace. Baxter made it home, to the place where he belongs.”

Amid the swirling “what ifs” and “if onlies” competing for real estate in my mind, this narrative is comforting and invites me to the present. Right here. Right now. Darrell. Me. All the feels.

Life is richest when we remember to hold space for ourselves and others through the ugly and beautiful beginnings, endings, love, loss, grief, and celebration integral to full and meaningful lives through which we are all, as the philosopher said, just walking each other home. 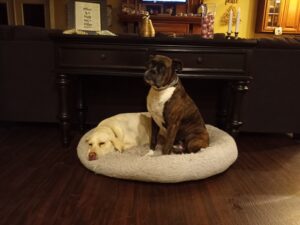